Is love really in the air?

Well, according to the musical musings of John Paul Young, it was in 1977.  But what about Valentine’s Day 2017?  Does anybody pay romantic heed to the Feast of Saint Valentine anymore?  Or have we all been worn down by tenuous tie-ins – from accountants, to motor mechanics and even dentists?

With some data visualization from Yellowfin’s Business Intelligence solution, we’ve revealed the truth about the current state of Valentine’s Day.

If Billboard’s special Valentine’s Day Top 50 Love Songs of All Time compilation is anything to go by, then it seems as a culture, we might have Lost That Lovin’ Feelin’. 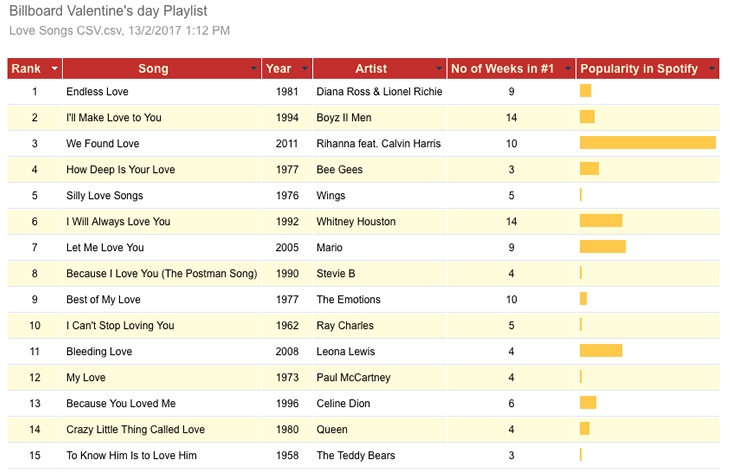 A note on rankings from billboard.com: The ranking is based on actual performance on the weekly Billboard Hot 100 chart. Songs are ranked based on an inverse point system, with weeks at No. 1 earning the greatest value and weeks at No. 100 earning the least.  To ensure equitable representation of the biggest hits from each era, certain time frames were weighted to account for the difference between turnover rates from those years.

The billboard.com list – which ranked the top 50 hit love songs to make the Billboard Hot 100 charts over the seven decades that the Hot 100 has been running – found that only one of the top 15 tracks was recorded in the current decade.

Unfortunately, for all those true romantics at heart (and, aren’t we all?), this billboard.com rankings data might just indicate a trend away from our collective infatuation with love songs.  And, if accurate, does our apparent apathy towards contemporary romantic records – compared to their classic counterparts – reflect a reduced enthusiasm for Valentine’s Day 2017?

Using Yellowfin’s Twitter Connector, we were able to track tweets under the trending hash tag, #ValentinesDayIn3Words.

Sadly, none of the top five most popular tweets contained messages of love, but rather words of sarcasm and cynicism.

This got us thinking.  Will these uninspiring words line-up with purchase patterns this Valentine’s Day?

According to the National Retail Federation’s annual survey on projected Valentine’s Day spending, US consumers will outlay $18.2 billion on gifts this Valentine’s Day – a sizable figure.

About the survey: The survey, which asked 7,591 consumers about their Valentine’s Day plans, was conducted January 4-11 and has a margin of error of plus or minus 1.1 percentage points. 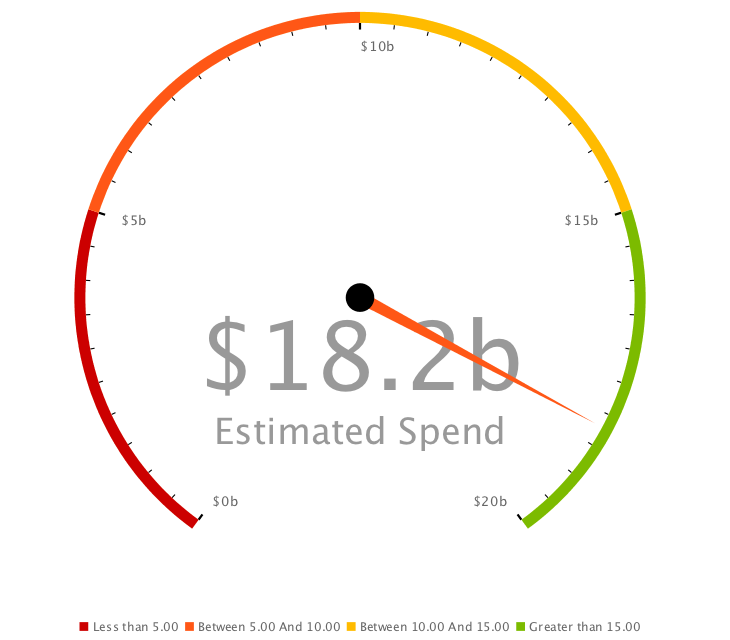 (If you like the look of these Meter Charts, they’re part of a whole range to new data vizualizations as part of our 7.3+ product launch at the end of March… stay tuned for more)

However, that number is still down eight percent from last year’s $19.7 billion.  It’s also the second lowest total in the last five years.

Further, just 54 percent of survey respondents said that they planned on purchasing a gift to celebrate Valentine’s Day 2017 – a 10 percent drop since 2007.  This could be due to financial concerns around a new US President, since there was also a precipitous drop in 2009 during Obama’s first month in office. 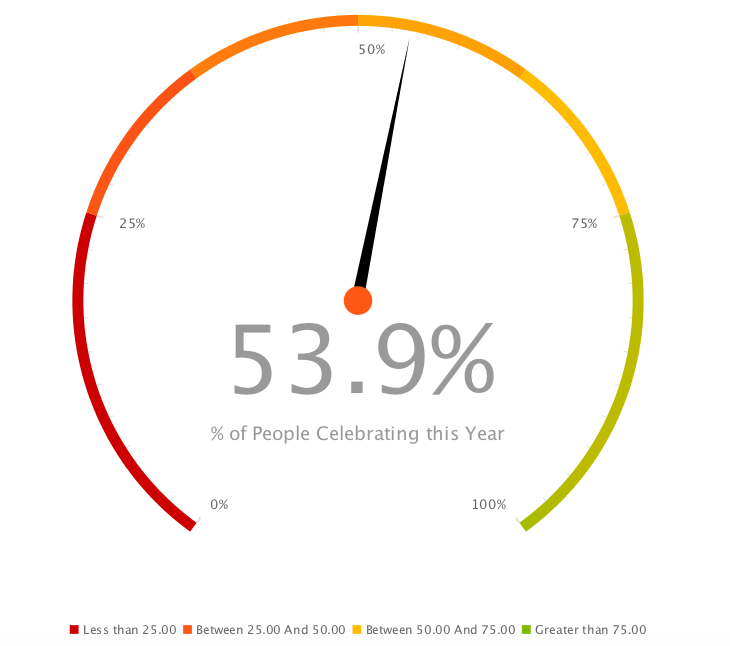 Of those spending money to express their love on Valentine’s Day 2017, candy is the most popular gift type, being on 49.7% of people’s lists.  However, as a relatively low-value purchase, candy is set to represent the third-lowest spend as a category ($1.7 billion). 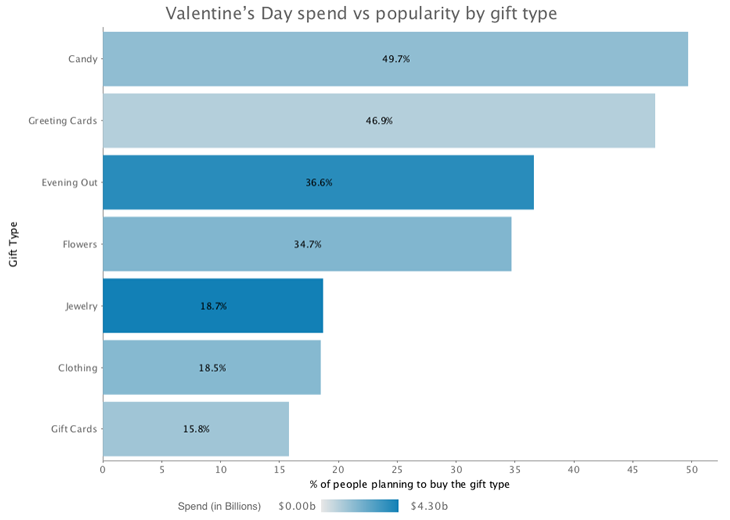 Inversely, while it’s anticipated that jewellery will be the highest value gift category in 2017 ($4.3 billion), it’s likely to be the third-least popular with only 18.7% of those surveyed budgeting for a more permanent expression of love.

Ironically, it seems that 46.1% of us will be doing exactly what Kit Kat suggests this Valentine’s Day – having a break.

And, for that 46.1%, plus no doubt some unlucky gift givers, it looks like we’re set for a No Vacation kind of Valentine’s Day.  A sad one.

So, what does it all mean for Valentine’s Day?  Is romance really on the wane?  And, if so, why?  Perhaps people are rebelling against the over-commercialization of February 14th?  Or, maybe these figures actually point towards a renaissance in romance, where more of us are choosing to express our love in less commercially overt ways like the Swedish?