In part two, we’re exploring the opinions and research of some of the BI industry’s most notable analyst groups. 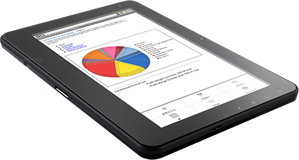 Respondents identified the three main drivers underpinning the adoption and implementation of Mobile BI as:
• The ability to achieve competitive advantage (54%)
• The ability to increase the productivity of mobile employees (41%)
• The ability to eliminate delays in alerting key decision-makers to critical information (30%)

The Best-in-Class are distinguished from Industry Average and Laggard companies by two main performance criteria:
• Ability to find required information using Mobile BI
• Customer satisfaction
The criteria were measured over a 12 month period.

Speaking at IDC’s Business Intelligence Conference 2011, Woodward suggested that the natural interactivity and uninhibited functionality (large screen), in conjunction with their portability, made tablets “the answer to BI execution in business”.

“What happens with a touchscreen tablet is that it takes things a step closer to the user,” she said. “You’re closer to the data, you can explore a little more richly than if you were using a mouse.”

“The best vendors are doing Mobile BI so that you write a report once and then that report can appear on whatever form factor people need it to be on, whether that’s a laptop, or a large screen, or a tablet,” she added.

“It’s helping with adoption and it’s helping bring execs on board with information and it really is something that’s quite powerful.”

Dresner concluded the official webcast launch of his updated 2011 Mobile Business Intelligence Market Study by declaring that the rapidly growing uptake and interest in Mobile BI meant that in the future, Mobile BI would not merely represent a growing facet of BI, but would become the main form of deliver for business analytics and the focal point of the entire industry.

“Moving forward I expect to see a rising tide across all segments, all classes of user, and all verticals,” said Dresner.

“I do believe that [Mobile BI] becomes fundamentally the new platform for Business Intelligence.”

Gartner expects that 33% of BI functionality will be consumed via mobile devices by 2013.

Dresner’s 2011 Mobile BI study ranked the mobile capabilities of the globe’s most notable BI vendors. Vendors were ranked according to the number of mobile platforms supported, the level of platform integration and the number of BI features supported.

Yellowfin’s Mobile BI platform was awarded the second highest score with a total of 14 points out of a possible 20. The highest score achieved was 15.

According to a study by The Data Warehousing Institute (TDWI) in 2008, only 24% of the potential BI users are using BI solutions. Clearly there’s a lot of room for improvement and potential gains to be had.

At Yellowfin, we believe that the rate of end-user adoption is the best method for measuring the success of any BI solution, because the more people with access to the benefits of quality BI, the better equipped any organization will be to respond to, and take advantage of, opportunities and shifts in their business environment. Mobile BI is a major driver for pervasive BI deployments.