Somehow, as if someone held down the fast forward button for many months in-between, it’s almost that time of year – again.

So what’s your approach to the silly season? Do you spend it with family? Do you get together with friends? Or maybe you pull the bed sheets over your head – to dampen the ear-bleeding affect of another cringe-worthy Christmas album – and send a derisive message Santa’s way?

Whatever the case, you need a tactic for avoiding Aunty Helen’s prickly kiss. So what’s your method of sabotage? Abstain from bathing? Fake illness? Or, get outrageously, ah-hem, merry?

However you celebrate, avoid or endure Christmas festivities in your part of the world, we share many common elements, impressions and mindsets. Equally, different cultures acknowledge the annual pilgrimage of St Nick with unmistakably unique rituals.

And, as usual, data visualization provides a uniquely useful method for showcasing such potentially complex information in an easily digestible manner.

Christmas around the world 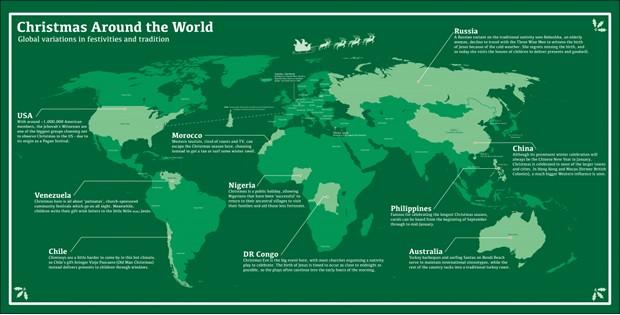 Spatialanalysis.co.uk has created an annotated world map, pinpointing and summarizing some of the world’s most inimitable Xmas habits.

While the USA is rightfully often thought of as the epitome of a modern ‘White Christmas’, it’s fascinating to note that a significant number of Americans don’t partake in Xmas revelry. For example, America’s large base of Jehovah’s Witnesses choose not to observe Christmas due to its Pagan origins.

In Chile, Christmas celebrations revolve around family cooking, which includes many traditional Chilean foods as well as oven roasted chicken or turkey. Delectable treats include “Pan de Pascua” (a sweet fruit cake) and a drink called “Cola de Mono”, which is made from coffee, milk, liquor, cinnamon and sugar.

And in Australia (Yellowfin HQ), it’s all about family barbeques, backyard cricket, lounging by the pool or heading to the beach to lap up the surf and sand.

But, what effect has recent global financial instability had on our exuberance for the big day, and willingness to indulge?

Christmas on a budget?

According to research into shopper behavior trends published on marketingweek.co.uk, those in the UK will be experiencing a thriftier Christmas in 2013.

Spending on gifts looks set to remain very comparable with 2012, with 53% of people planning to splurge the same amount, 21% looking to up-the-ante and 25% intending to rein in their Xmas outlay.

Enter The Grinch of Great Britain… 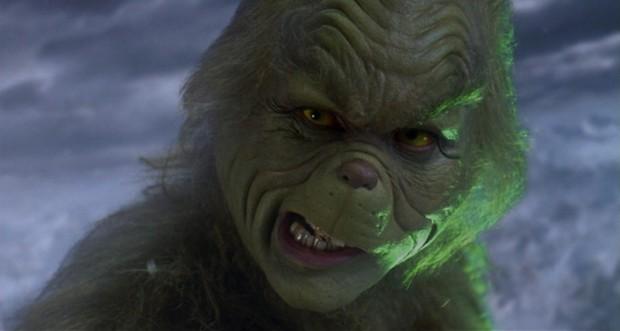 Although this year, it seems that Brits will be saving big on decorations. Just 36% are expecting to part with the same amount of hard-earned coin compared to last year, while 28% will be ditching the tinsel tinged décor altogether.

But, it seems that love, generosity and pester power will ensure no shortage presents under the tree – and associated credit card debt – this silly season.

According to data collected by eMarketer, e-retail spending over the Christmas holidays (November and December) in the US has increased sharply year-over-year since 2008. 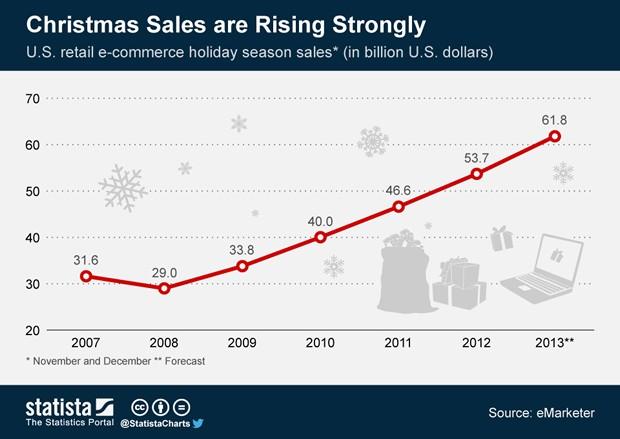 Over the course of six short years, from 2008 to 2013, e-retail sales across the Christmas period have increased by a staggering $32.8 bn.

But for all the e-commerce success in the US, online shopping remains largely hype in Oz. Only six percent of Australians plan to purchase their Christmas presents from locally based online shopping outlets, while a mere two percent will checkout their trolleys via overseas online stores. 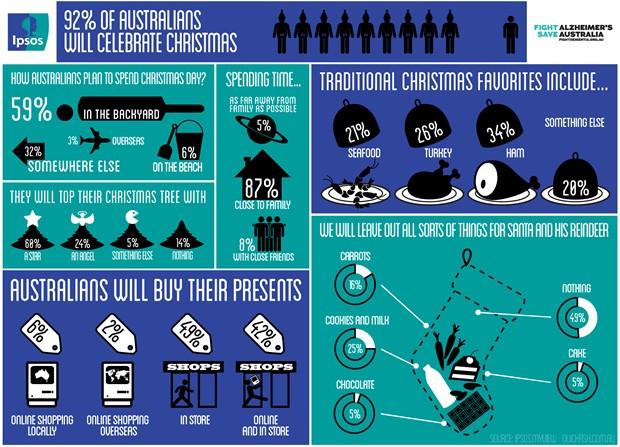 While the aforementioned stereotype of backyard family barbeques is well supported by research conducted by fightdementia.org.au, only six percent of Australian’s are planning on heading to the beach on Christmas Day.

As a country known for its multiculturalism, it’s probably no surprise that Australian’s are deeply divided when it comes to Christmas nourishment, with “traditional Christmas favorites” evenly spread between seafood (21%), turkey (26%), ham (34%) or something else entirely (20%).

Aussies are also far from unanimous when deciding on Christmas Eve treats for Santa and his reindeer. Forty-nine percent forgo this tradition completely, 16% believe that healthy eating is the way to go (carrots), while junk food reigns supreme with 25% opting for cookies and milk, five percent offering chocolate, and a further five percent sacrificing a slice of cake for the cause.

Do it your way

So what’s our point? Well, in the words of legendary crooner Frank Sinatra, make sure you do Christmas your way. 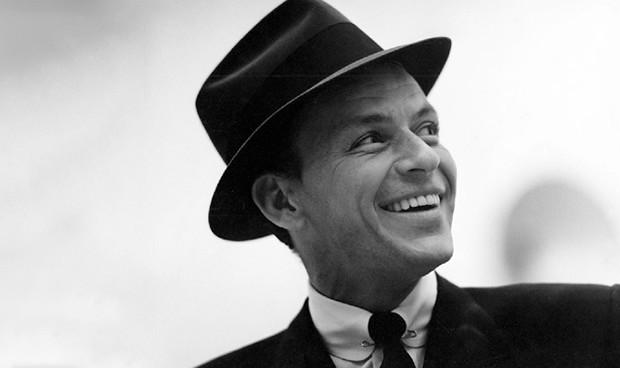 Embrace the customs and routines that make December 25th significant to you and the important people in your life.