What are you dressing up as for Halloween?

In Britain, we tend to go for the spooky end of costume options – witches, zombies, ghosts… But for our cousins across the pond, nothing is off limits. Yes, the ghouls and the ghastly make an appearance, but so do superheroes, hippies, unicorns, and rabbits.

But what I wanted to know was how much our costume choices were influenced by the box office hits. So, I joined up with a couple of colleagues to have a dig into the data using Yellowfin.

We pulled data from Google Analytics for Halloween costume searches in both 2017 and 2015. Then, we took a look at the box office gross totals.

For example, Wonder Woman saw a box office hit in 2017 so it’s green and sized to reflect the gross takings. Looks like you’ll be seeing Wonder Woman on your doorstep this Halloween.

So here’s which characters are topping the charts… 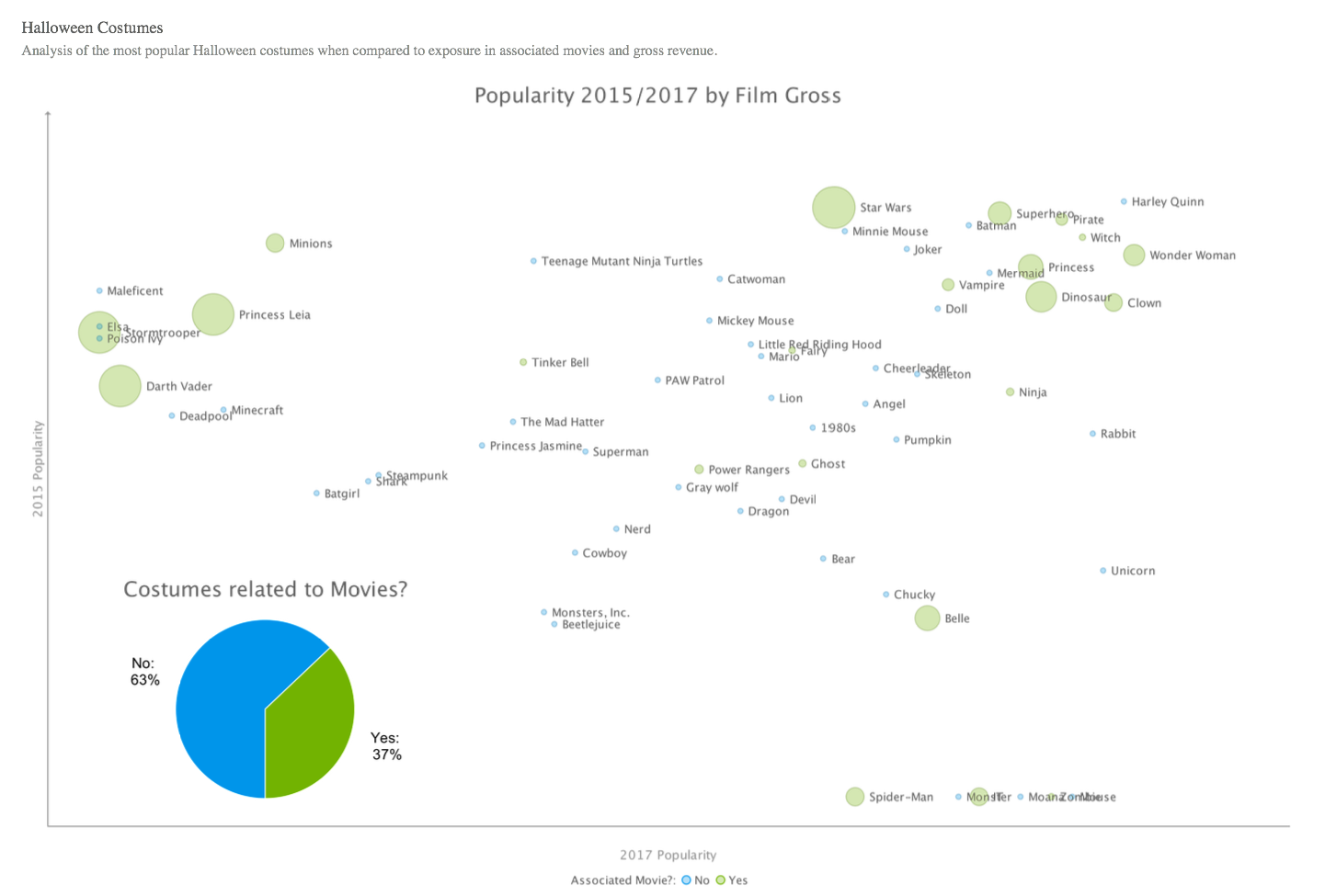 Costumes topping the charts both years

Looks like the staples are staying – superheroes, pirates, witches and princesses. But there are more nuanced results here.

Despite not gracing the silver screen in either 2015 or 17, Harley Quinn takes one of the tops spots in the Halloween costume popularity lists for both years. It seems she’s the poster girl for comic book horror. Beware of the pigtailed trick-or-treater – Harley Quinn is back.

Another comic favourite is Wonder Woman whose chances of appearing this Halloween are particularly high after the incredible 2017 film. It seems she was the most searched costume on Google this year. Wonder Woman joins the ranks of other superheroes as a costume choice that has remained a favourite since 2015. Creepy clowns are ever popular, but this year it coincides with the release of the horror film It. Google searches for clown costumes have stayed steady, but clown makeup and costume saves on Pinterest are up 941% YoY. We’re expecting Pennywise the clown to turn up on your street this year.

Another favourite outfit choice is anything Star Wars. It’s an enormous franchise, highlighted by just how huge its green circle is. Though 2015 did see the release of Star Wars: The Force Awakens, it wasn’t released until after Halloween. And, the same applies for the release of Star Wars: The Last Jedi this year – it’s not out until December 2017. But it seems that fans are getting dressed up in anticipation. Expect stormtroopers, Darth Vaders, Princess Leias and more, but probably fewer than in 2015. Making a new appearance for 2017

It seems that many of our favourite characters reappear each year, but the box office certainly impacts the spike in appearances of particular characters.

‘Princess’ is a somewhat generic costume that’s stayed popular, but Belle of Beauty and the Beast seems to be making a particular appearance this year. Pinterest and Lyst have tipped that searches for yellow dresses spiked with the releases of both Beauty and the Beast and La La Land. It looks like those yellow dresses might just be perfect for reusing at Halloween for Belle. This Disney princess is getting a special profile for 2017 after the box office hit, which currently ranks number 1 for the year. Spider-Man has also made a fresh appearance. As one of the superheroes, he’s probably been around before, but not singled out with such a high profile for Halloween. The Spider-Man: Homecoming film is sitting at number 4 in the box office, so it seems that Spider-Man searches for Halloween 2017 have been influenced by the big hit on the screens.

We can also see 2017’s unicorn craze filtering into costumes. We’ve had unicorn frappuccinos, unicorn toast, unicorn nails, unicorn…anything you can make look like a magical rainbow. So, it’s no surprise that unicorns are topping the Halloween popular costume chart of 2017. There’s no film attached, so this one is a fresh, non-Hollywood craze. Magical.

Then there are rabbits. I really don’t have an answer for this one. Did I miss a craze? Maybe you can help me out…

If you’re looking for which costumes to pick or avoid, here’s a data visualization to help.

If you want to be unique, try something on the right-hand side of the chart. But turning up as Elsa from Frozen might make you look out of touch. That was so 2013.

Or if you want to be in the ‘it’ crowd, try a character from It. You’ll be joining the masses if you turn up as Pennywise, but nobody can accuse you of not being on-trend. If you prefer Disney, Moana, the adventurous Polynesian teenager, is a fresh contender. That film was released at the end of 2016, so Halloween 2017 seems the perfect time to embody Moana’s tropical vibe. And, a bit like the rise of the rabbit for Halloween costumes in 2017, we have a surprise entry for the biggest increase in popularity – a mouse. Again, if anyone can shed light on a reason for this…

Despite Wonder Woman being high on the list for 2017, she has been a staple Halloween character for a few years, so there’s little change in the popularity. It’s a similar story for witches, Harley Quinn, dolls, and lions.

However, it seems that stormtroopers, Darth Vader, and Princess Leia are less popular for 2017 than in 2015, despite the upcoming film. But don’t worry, the Star Wars characters are still tipped to be big this year, they’re just not quite as popular as they have been.

Hollywood and Halloween – a correlation?

It seems that the box office does have an influence on the costume trends for the year. But a bigger movie gross doesn’t directly impact the costumes that are most popular – some costumes stay whether Hollywood celebrates those characters or not. And there are always the inexplicable costumes that buck the trend. I’m looking at you, rabbits and mice.